Racing at Salem was eye-opening in many ways, but perhaps the greatest insight I had that day was, “Holy cow!!! I need a new road bike!”

Now, I have had the same 10-speed since I was twelve. It is the original blue Panasonic I used to ride to my friends’ homes way before I had a driver’s license. It has seen many good times, and frankly I am quite attached to it. But it does have its quirks. The handlebars are just ever-so skewed after a crash many years ago, the seat has a tear, and one of the wheels is also in less-than-desirable condition. My maximum speed on that bike was also a “scorching” 14 mph. But like I said, I am fond of it. When the mechanic at our bike shop told me that “there was just only so much they could do to help an old bike like mine,” I was a little miffed. Just you watch who are you calling old, buddy! : ) However, after seeing the beautiful road bikes at Salem gleaming like jewels on the black asphalt, I had serious bike envy. I was a little relieved when they cancelled the bike!
After Salem, Bryson and I decided that if we were going to really delve into the world of triathlon we would need better wheels. And so the search began. We brought Chris along for his encyclopedic knowledge and experience. We spent the greater part of an afternoon looking at Specialized, Felt, Scott… and I was getting a little frustrated because nothing was feeling “just right” for me. The final stop of the day was at the Trek store. And this is where I found her: 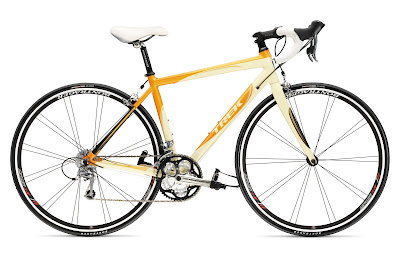 At our house we call it the orange creamsicle. Technically, it is a Trek 2.1 WSD. After my poor little ten speed, it has been a revelation. It is amazing the difference a good pair of wheels makes. Bryson decided on the Trek 2.1 as well, so most Saturday mornings you can find us
around West Mountain… two blurs in orange and blue. ; )

We took our new aquisitions to Lake Tahoe recently and had a blast riding the trails and roads there. I am slowly gaining confidence on the bike… It is my weakest link of the three triathlon disciplines, but I am steadily improving. Of course, the creamsicle is helping. : ) Currently my average speed hovers around 16.5 mph. The greatest challenge for me is simply trying to find the time to ride. With two toddlers at home, it is fairly simple to take the jogging stroller out or go to the gym (they have a kids’ club there.) But despite long hill climbs on the stationary, it doesn’t quite replicate the experience of being out on the road. Cruising on the rural routes with the wind rushing by… it is a fantastic feeling. I highly recommend it!

This site uses Akismet to reduce spam. Learn how your comment data is processed.